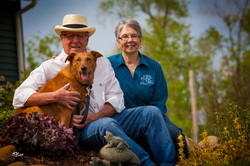 Bill Bickert retired from Michigan State University in 2007 after servicing as a professor in Agricultural Engineering for over 40 years.  Bill is known throughout the United States, Europe, Central and South American, and Asia for his contributions in animal housing, animal comfort, and later as Director of Manure Management at Michigan State University.  His dream for retirement was to build a home in the middle of 40 acres where he would raise cattle.  Much of his dream was realized when he retired in 2007, however, instead of cattle, he and his wife are producing Puerto Rican Paso Fino horses.

Rosie Spagnuolo Bickert retired from Michigan State University in 1993 after 25 years of services.  She enrolled in her Master's of Social Work degree from the University of Michigan, graduating in 1994.  She currently has her private practice in their first barn, where she specializes in treating individuals, families, and groups who have been traumatized and are experiencing posttraumatic stress disorder, depression, and anxiety.  She integrates the healing powers of their Puerto Rican Paso Fino horses in her practices. She is a certified Equine Assisted Psychotherapist and is currently being certified in the Equine Gestalt Coaching Method by Melisa Pearce in Colorado.