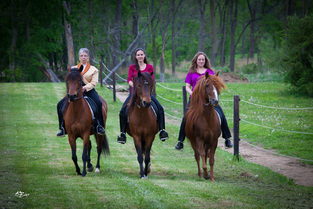 Their natural gait was the pace, wherein legs of one side alternate with those of the other side.  In time, as a result of selective breeding and island topography, the pace gave way to the four beat lateral gait we know today.  This gait is distinguished by its distinctive rhythm, short extension, and vivacious and delicate footfall.  This rhythmic progression is isochronal (performed in equal intervals of time) and isometric (having equally spaced forward movement).  Front and rear legs should be of equal angulations, denoting the slightest horizontal or vertical movement of the horses' rump.  Vertically, hoofs are not to extend higher than four to six inches from the ground and with particular smoothness, avoiding physical vibration of the animal or the rider.  The Puerto Rican Paso Fino should be collected, of proud carriage, arched neck and open and alert ears.  He is to have corporal balance and equilibrium and direction of his extremities in relation to the ground.  These characteristic components of the breed are the "raison d etre" of the smoothness, refined, vivacious and rhythmic four beat gait which distinguishes the Puerto Rican Paso Fino.  It goes without saying that the irreplaceable mark of the Puerto Rican Paso Fino is its four beat lateral gait.  This gait is inbred and genetic, as opposed to man made.

If your chest does not swell at the sight of a newborn foal keeping the gait along the side of his mother, something is wrong with you.